Jowl bacon is to the South what guanciale is to Italy. A fatty, silky chunk of awesome.

It is what you think it is. Bacon, made not from pork belly, but from the cheeks of the hog, known as pork jowl — which you’d understand if you’ve seen fat pigs in a barnyard.

Well, my friends Christian and Kate Spinillo have lots of fat hogs at their Ham Sweet Farm in Michigan. And they were nice enough to send me home with one the other day. I could have made more guanciale, which is cured and dried pork jowl.

But I wanted to smoke it, and besides, I’ve been cooking Southern a lot lately, so jowl bacon it is.

The recipe is ridiculously simple: Cure the pork jowl, dry it out overnight, then smoke it cool until you’re happy.

In my case, I did what’s called an equilibrium cure, which means you weigh out a percentage of salt based on the weight of the meat, seal the meat in a vacuum bag and set it in the fridge for, well, a while. The beauty of this cure is that you can leave the meat longer than you might think and it won’t get too salty.

I do use curing salt, and you should, too. I know there are all sorts of people weeping and wailing and gnashing their teeth about nitrite, but they are fooling themselves. “Oh! Use celery powder,” they say… perhaps not realizing that celery powder has more nitrite than what I use when I use Instacure No. 1. You can buy curing salt in good butcher shops or online through places like The Sausage Maker.

Incidentally, you will need a gram scale

to do that properly. If you are making sausages or any cured meats, or baking, for that matter, you should have one.

Can you skip curing salt, celery or otherwise? Yes, you can. But it’s a harder process. You need to keep the meat very cold, as in refrigerator temperatures, at all times until you put the meat in the smoker. Then you need to smoke at very cool temperatures, as in less than 80°F, in order to get that specific bacon flavor and that pretty rosy hue we all know and love in bacon.

What wood to smoke on? I prefer a Southern wood, like pecan, which is what I used in the pictures, or you can use oak, hickory, apple or cherry.

Remember you are smoking bacon here, so you need the smoker to be cool-ish. I set my Traeger at 165°F and move the meat right from the fridge to the smoker, then leave it there for 3 to 4 hours. You can go longer if you want.

So how can you use jowl bacon?

Anyway you use regular bacon. Keep in mind most pork jowl has skin on it, which you can of course eat, or slice it off right before or after smoking. I like to slice off the skin and add it to a smoky broth I make with the carcasses of smoked ducks.

The bacon itself is typically fattier than normal bacon, and is excellent as a fat for cooking beans, greens or anything in the cabbage family. Cut the jowl bacon into pieces, fry them crispy, then remove (eat a few pieces) and cook the dish as normal. Return the crispy bits into the final dish at the end. 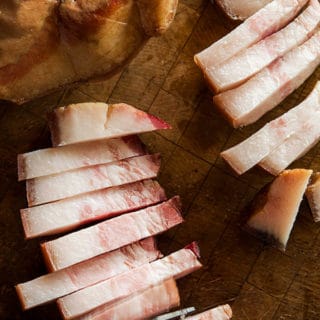