This is an unusual German rabbit stew with the memorable name of eingemachtes kaninchen, according to Mimi Sheraton in her excellent book The German Cookbook: A Complete Guide to Mastering Authentic German Cooking. It’s a light, bright counterpoint to the more famous hasenpfeffer, which is made with hare.

This particular rabbit stew is a Swabian recipe, from Southern Germany. For those of us in the United States, when we read the recipe and we don’t immediately think of Germany, but rather of that country’s former financial nemesis: Greece. Lemon, capers and bay leaves play a prominent role in this stew.

But instead of oregano and olive oil and yogurt, the Germans use parsley and butter and sour cream. It is brothy, meaty and tart, with just a whiff of creaminess. Think avgolemono with more fiscal discipline. (If you want to go full Greek, I have a recipe for Greek rabbit stew.)

You may be wondering if this rabbit stew is some sort of variant on the most famous German rabbit recipe, hasenpfeffer. It is most definitely not.

If you want some variation, try this stew with chicken, pheasant, quail, grouse or turkey. I bet it would be good with a firm fish like halibut, too. It is very good with boiled or mashed potatoes, or rice or just some crusty bread.

This recipe, however, is a perfect stew for cool nights, yet still light enough to enjoy with a chilled white wine outside on the porch as you watch the sunset, thinking about the next time you’ll get a chance to chase Mr. Cottontail.

Chances are if you’re a hunter, you know how to joint a rabbit. But for those of you buying your bunny, they all come whole, so you will need to part it out yourself. I’ve written a tutorial on how to cut up a rabbit here.

Be sure to read the recipe’s headnotes, because while the base of this rabbit stew will keep for a few days, once you add the cream, you’re committed. So my advice would be to make the base and only add the cream and white wine right before you serve the stew. 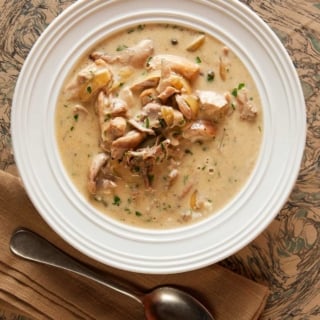 Chicken thighs would work well here, too, as would pheasant. There is another version of this stew in Germany that uses veal, too. It is a two-step stew, meaning you make the base and "mount" it with sour cream, white wine and capers right at the end. Once you add those final ingredients you are committed, so if you want to make this for dinners or lunches for the week, store just the base (up to Step 4) and add the remaining ingredients when you want to eat.
Prep Time30 mins
Cook Time2 hrs
Total Time2 hrs 30 mins
Course: Soup
Cuisine: German
Servings: 4 people
Calories: 705kcal
Author: Hank Shaw

Serve this with bread or potatoes and a crisp, German white wine. A lager beer would be good, too.