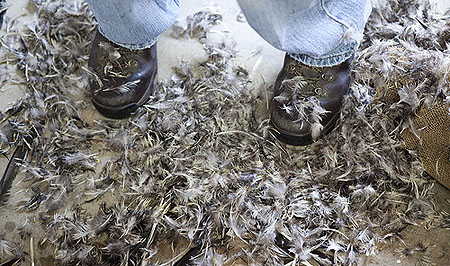 Here is a story about a strange gift, an unusual challenge, and three very old, very ornery roosters. And as you may well guess, it ends badly for the roosters. To a point.

I have become something of our Italian neighbors’ personal rooster assassin. I killed my first two years ago, and have returned at their behest several times since. Dominic and Rosa raise chickens, and those chickens lay eggs and those eggs hatch and some of them become roosters. Dominic and Rosa do not eat their chickens, so those roosters grow to reach their full roosterhood. And there are a lot of them in their coop.

You can imagine what happens when you get 20 guys in a confined space, all with eyes on those 10 girls. It is a game of musical chairs that half of those playing will lose. And roosters are sore losers. Armed with vicious spurs, they can and do attack each other, much the same way drunk frat boys do on Saturday nights.

Think of me as the bouncer. Usually I deal with the rooster equivalent of a frat boy — the last bunch I “took for a ride” were just four months old. These were some tasty birds, and the Rooster Dordogne I made from them was outstanding. Would I be so lucky this time?

Holly and I were just about ready to head to Napa to visit friends (and hunt turkeys) when we heard a knock on the door. It was Rosa. She said she had a gift of three roosters ready for us. Now. In a sack. In the car.

It is not often you get a neighbor knocking at your door offering you three live roosters, which she has so kindly bagged for you. Even here, this is uncommon at the very least. With great regret I told Rosa I could not deal with these roosters until the following week. She said OK, that she’d keep them separate in a cage until the following Saturday.

Enter the Food Bloggers. It occurred to me for some inexplicable reason that my friends Garrett and Elise might want to come over and watch/help/stand in horror while I did the deed. Then I remembered the conversation I’d had with Biggie, who destroyed me in the Well-Fed Network’s Best Food Blog contest this past winter. Biggie had wanted to learn how to break down whole animals into serving portions, and while the original idea was a pig or a goat, I suggested we could start with a chicken. She said she was game.

So everyone arrived, and I donned some heavy leather — remember, these are roosters with spurs they know how to use. We wandered over to the chicken yard, and I expected the roosters to be in something like a rabbit hutch. No such luck.

When I saw the “cage” I immediately thought of Thunderdome. The three roosters were living in a 10-foot square enclosure with a roof (roosters can fly) made from, well, stuff. Chain link, piping, boxes, random bits of metal, an old car door, etc. And I needed to extract these birds from this place, the interior of which was littered with old bathtubs, buckets, pipes that served as pillars and other debris.

Dominic’s net didn’t do me much good, either. The net at some point in the Jurassic Period has been a large fishing net, but Dominic had repaired it over and over and it only just barely was still a net; actually it was more like a giant homemade tennis racket.

And I had an audience, snapping pictures no less. (Elise took most of the photos for this post.) These roosters had been freely ranging in the coop long enough to build up a healthy set of running legs, so there was much running and feinting and bobbing and weaving; think about that scene in “Rocky.” Eventually I managed to slap the net down on one of them.

Now what? Well, this is where I kill the rooster by spinning it like a helicopter, breaking its neck. An ugly business, but at least it’s quick. On to the second rooster. He was cagier, but I caught him, too — although this bruiser broke Dominic’s net.

With one more bird to go and no net, I needed Garrett’s help. Garrett grew up with a relative who raised chickens, so he sorta remembered what he needed to do. We attempted to corner the bird — while trying to avoid the spurs — and Garrett just about got his hands on it when FOOM! The rooster found a hole in the cage and exploded into the air like a moon rocket.

Sweating and out of breath, I looked at Garrett: “Two out of three ain’t bad.” Rooster No. 3 would live to crow another day.

So there we were, with a pair of old, dead roosters in a burlap sack. Now they needed to be plucked, and plucking a chicken is a smelly job — far smellier than plucking pheasants or ducks.

I scald my birds in hot water the same way I pluck a pheasant. After that, I pluck as fast as I can while the bird is still warm; it goes quickly.

Then Biggie and Elise and Garrett got into the act. The first bird was a tester, so I could show them the fine art of chicken plucking, such as it is: Wings first, then back, then tail, along the keelbone, legs then neck.

Their rooster was the older of the two, and significantly larger. I kept thinking as they plucked. “What the hell am I going to do with these birds?” Old birds are tough birds. This would be a challenge.

“Oh my!” Elise had turned over their rooster and noticed its spurs. I just about had a heart attack — the spurs were nearly three inches long, curved and very, very sharp. But for the Grace of God that rooster could easily have sent me to the hospital. I was feeling a lot better about leaving that last bird, and was beginning to understand why Dominic and Rosa never killed their own chickens.

Once plucked, we broke down the roosters into serving pieces, and the others marveled at how red the meat was. Store-bought chicken may be the Original White Meat, but a “walkin’ around” rooster that has several summers under its spurs reddens even more than a wild pheasant, which typically only lives a year or two.

I sent Garrett home with the carcasses for stock. Rooster stock is by far the finest chicken stock in the world. It will give you the strongest chicken flavor possible, so much so that I label it “Rooster Stock” to separate it from the regular pheasant and chicken stock I make.

The rest, I decided, would become sausage.

Notice how dark these links are? They are darker even than some of the pork I have used. Let me tell you that the legs of these birds were so tough I think I dulled my knife on the tendons. The only animal with stronger sinews I can remember was a geriatric mule deer doe I shot in Montana.

I added some pork fat and then flavored the sausages with lots of fresh garlic, some fennel seeds, the zest of a lemon and lots of fresh oregano, plus some Madeira. I tossed in the liver, heart and gizzards for good measure. Here is the recipe.

How were they? “Chewy,” Elise said. “But really flavorful.” I concur. If I had it to do over again I would spend more time removing sinew and silverskin, and I would grind the meat and fat a second time through a finer die, hopefully creating a smoother sausage. (this is reflected in the recipe above.) We ate some tonight loose in a tomato sauce with pasta, and it was better.

In the wider world, these roosters are an anomaly. Roosters are killed and eaten at 6-8 weeks in factory farms, well before they develop the attitude (and the parts) of a full-grown rooster. Even in traditional farms, roosters (unless they are the breeders) rarely make it past a year; the oldest chickens in a barnyard are typically laying hens. A five-year-old rooster is a rare thing indeed, although they can theoretically live into their teens.

Biggie, Elise and Garrett all said they were glad to be able to see something go from living animal to plated dish — not “glad” as in happy, so much as gratified to have been able to see what so few of us see anymore. It is not a pretty thing, killing a bird. But it happens many millions of times every week in America; Dominic and Rosa’s roosters lived far longer than most of their brethren. And old and tough as they are, these birds won’t go to waste. 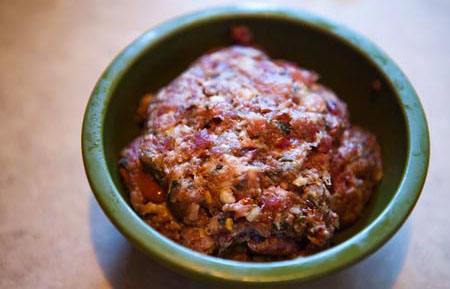