It’s cold. Colder than I ever expected Africa to be. I sit on a box in the tiny yard behind my host’s home, a forbidding, one-story concrete box with only few windows, each set higher than a man. There are bars on them. A six-foot concrete wall surrounds the yard, shielding me from the rest of Kliptown. I am shaving.

I trim my stubble with a disposable razor used I-don’t-know-how-many-times, holding a broken mirror in my other hand to see. A bowl of frigid water sits between my legs. I have no shaving cream. A little boy, who his mother says is ten but who looks half that, stares at me while I shave. I smile at him. He doesn’t smile back. He keeps staring. As I finish, he reaches out a little hand to touch me. An act of affection? No. He smears his hands across my forearm, as if trying to wipe something off. My white skin, burned brown by the African sun, doesn’t budge.

I’m startled by a girl’s voice behind me. “He’s never seen a white man up close,” his sister says. “The other boys tell him that white men are devils, that they paint their skins to scare us.” Images of Apache and Sioux warriors in warpaint burst into my mind, and I smile at the irony.

Their mother, Mary, appears at the back door. “It’s light enough. We can go now.” I rise to leave and the boy’s sister, whose name is lost to me, touches my arm. “Thank you for cooking for us last night.”

It was the least I could do.

This memory, this cold morning in a suburb of Soweto, still rings sharp in my mind nearly 20 years later. I was a young reporter then, eager to make a name for myself. I’d studied South Africa in college, and had just earned a graduate degree in African history from the University of Wisconsin. I spoke Swahili. My dream was to become a foreign correspondent, and I needed to get overseas.

It was early summer, 1995. Nelson Mandela had just been elected as the first black president of South Africa the previous May, and another election loomed. This one appeared to be trickier than the national ballot — it was for all the local political offices, down to municipal elections. It would be mayhem.

I’d secured a few contracts to write stories about the election from some small magazines; enough to pay for the trip at least. I had no firm plan, but I knew I needed to go to Soweto, the black township outside Johannesburg legendary both for violence and the birth of the anti-apartheid movement. I was tagging along with a group of teachers and college professors, and one of their fixers decided to help me out. This was Mary, and she lived in Kliptown, southeast of Soweto.

South Africa in 1995 was a dangerous place. I’d already been mugged at gunpoint a few days before, as I walked through a park near my hotel in Jo’burg. A gang of tsotsis — South African slang for gangsters — surrounded me and one of the teachers. None were taller than my shoulder, and I could easily have kicked the shit out of any one of them. But the one holding the janky old revolver had my attention. I was virtually certain it did not work, but I wasn’t keen on finding out for sure.

I knew the drill, having been mugged several times in New York City as a teenager. I raised my hands and they took my wallet, which I’d already cleared of any valuables except for a hundred rand or so (rand is the South African dollar).

This had happened within sight of an international hotel. Hanging out in Soweto, where police protection would be non-existent, was an order of magnitude more dangerous. Mary drove me to her home. “Don’t look out the windows and don’t take pictures,” she said. Taking a white man home to Kliptown was risky, but she knew a bunch of people who would be willing to talk with me about the upcoming election.

The interviews went really well, but they ran long; it wasn’t every day that Sowetans got a chance to talk to American media, and they had great stories to tell. I went through two pens taking notes. Mary was getting agitated. We needed to leave before sundown. “It is not safe for you to be here at night,” she said.

But night caught us. Mary was visibly nervous as we got into her car. She told me to keep my head down as we drove. Unlike the mugging, this time I was actually scared. She said that tsotsis would stop the car, rob and beat me if they found me in Kliptown at night, or even worse. A white social worker had been “necklaced” the previous week. Necklacing is where they soak a car tire in gasoline and jam it around your arms and shoulders, then set it on fire. A horrible, horrible way to die. I shuddered.

She stopped the car and whisked me into her home, a squat concrete blockhouse. As forbidding as the night outside had seemed, the inside of Mary’s house was its equal and opposite: Music was playing, the walls draped with colorful cloth, shelves of pictures and knick-knacks, her husband Ben lounging on a well-loved couch with an old TV blaring the news, kids playing a board game in another room.

Mary spoke to Ben in what I assumed was Xhosa; I knew they weren’t Zulu, that’s all. Ben looked at me, concerned. I could tell they were arguing as calmly and as quietly as they could, knowing that while I couldn’t understand their language, I wasn’t an idiot. After a few minutes, Ben relented. He walked over the the fridge and opened up two Castle lagers. He handed me one.

“Are you hungry?” Mary asked. I was, but I had a thought. I’d recently left Wisconsin, where I had worked at an Ethiopian restaurant. I knew how to cook, and I knew how to cook African food. Maybe I could cook for them? Mary laughed. “What do you know about cooking?” Apparently men weren’t well-known cooks in her world. I told her I’d been a cook in a restaurant. She insisted that she cook for me, and I insisted that I cook for her, as a small show of appreciation for keeping me safe. “OK, OK,” Mary said. “You know how to cook boerewors?”

She presented me with a big coil of sausage. How hard could it be? “Sure,” I said. I looked in their fridge and in their pantry. There were some unknown greens, beans, onions, a few potatoes. Not many spices. Nothing I could really make Ethiopian food with, but no matter. I set to work.

It was a simple affair. I cooked the greens soul food style, like collards, caramelized some onions and seared the boerewors as a whole coil in their largest frying pan. Everything came out well, but it’s the sausage I remember most. It tasted a lot like the brats I’d eaten in Wisconsin, only with something different. Coriander, maybe? It didn’t matter. It was good, simple, hearty food, and the whole family liked it.

After dinner we watched the news on television. It was indeed mayhem. The elections were still some months away, but Zulu were fighting Xhosa in Durban, whites were circling their wagons in tight communities now that their position had diminished, and Cape Town was suffering from riots and yet another crime wave. I told them about the mugging, and about how nasty New York City had been when I was growing up in the early 1980s. After a few more Castle lagers, I went to sleep in a back room on an old Army cot. As I drifted off, I heard gunfire outside. Not close, but close enough. I did not sleep well.

The next morning, Mary dropped me off at my hotel. I thanked her over and over for all her help, and her hospitality. She shrugged it off. “Just don’t forget us,” she said as she shut her car door to drive away.

It’s been almost 20 years, Mary Mbotho. I have no idea where you are now, if you are even alive. But I haven’t forgotten you, your family, or your hospitality. Thank you. 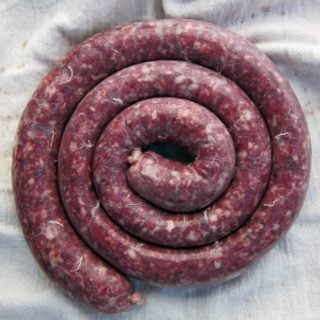 It's been many years since I ate boerewors in Africa. I did eat it a few more times when I was in South Africa, including at a braai (barbecue) hosted by an Afrikaner political candidate outside Bloemfontein. I've never even seen this sausage in America, although I bet I could find it if I looked hard enough. The origin of this link is Teutonic, as the Afrikaners are of mostly Dutch and German origin. So it's a little like a bratwurst, but with more aggressive spices. Typically it's a mix of beef and pork. There are many recipes for boerewors out there, just as there are with other traditional sausages like Italian and brats. This is mine. If yours is different, let me know how, as I'd be interested in hearing more variations. Boerewors is almost always made as one long coil and grilled slowly over coals or wood in a braai. It's a damn good party food this way, as people slice off however much they want and eat it on bread or with potato salad and grilled vegetables.
Prep Time1 hr 30 mins
Total Time1 hr 30 mins
Course: Cured Meat
Cuisine: South African
Servings: 20 links
Calories: 334kcal
Author: Hank Shaw