Bear fat. Mystical manna to some, acrid monstrosity to others.

How can this be? How can one substance be both things? It can, and here’s why:

Like pigs, raccoons, ducks, geese and yes, humans, bears are omnivores. And no other sort of critter tastes more of what it eats than an omnivore. I suspect this is because of the huge variety in diet an omnivore can have — a deer pretty much just eats leafy things, while a mallard can eat shrimp, clams, corn, barley rice or bugs (and often eats all of these on a given day).

In the last days of 2012 Holly shot a black bear that we guess had been eating lots of manzanita berries and other wholesome things, because a) the bear was hugely fat and b) that fat was sublime. I rendered out more than a gallon, froze most of it and have been using the bear lard ever since.

If you read enough American literature, especially frontier literature, you will come across references to bear grease. It has been a uniquely North American substance that has indeed been used for cooking, waterproofing (I waterproof my boots with bear fat), greasing machinery, slicking back hair, lighting lamps and who-knows-what-else. But the most breathless prose has always been reserved for bear fat in pastry.

Most bakers know that pork lard makes the flakiest pie crust, and bear fat has virtually the same properties as pork lard: It looks the same, smells and tastes fairly neutral like pork lard, melts at a similar temperature and stores just as well.

I couldn’t find any comprehensive data on the nutritional details of bear fat, and the probable reason is because it’s so variable. There is a fairly hilarious study coming out of the University of Nebraska that did find that the fat in black bears pillaging suburban garbage cans is far higher in unhealthy trans fatty acids than those with little or no contact with humans. Hot Pocket bears, anyone?

At any rate, I like buttermilk biscuits. A lot. So I had to give bear fat buttermilk biscuits a go. I started with a recipe I knew would work: Elise’s over at Simply Recipes. Her recipes are always tested and true. Her recipe goes on to make that classic milk-and-sausage gravy, and while I could have done that with bear sausage, I confess to hating white gravy; I am a red-eye gravy man.

I can tell you that damn these were good! I even hippie’d it up with some acorn flour, too, and it was still great. Flaky as hell, neutral — no “beary” aroma or taste — and well, just some really good biscuits. Don’t have bear fat kicking around? Use regular lard. 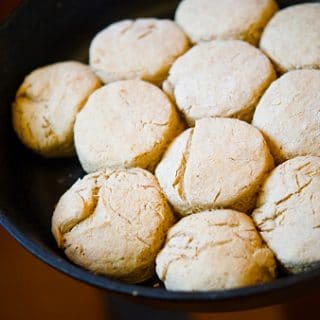 You can of course make these biscuits with lard or duck fat. But if you do, make sure the lard is freshly rendered, not the nasty hydrogenated stuff that can be kept at room temperature. If going all-bear or duck or lard freaks you out, go half and half. You will notice that my biscuits are a little dark. This is because I used 1/2 cup of acorn flour. You can do this, too, or sub in up to 1/2 cup of any other sort of flour for variety.
Prep Time12 mins
Cook Time18 mins
Total Time40 mins
Course: Breakfast
Cuisine: American
Servings: 12 biscuits
Calories: 204kcal
Author: Hank Shaw