Agretti is just sexy. Lacy, delicate, but packed with flavor, this relative of the sea bean is one of the most unusual residents of my garden.

Growing and cooking agretti is easy, too, once you learn a few tips and tricks.

Let’s start with what is agretti: It is one of a group of “saltworts” that were once burned to make the alkali soda ash used in glassmaking. Many of you know about sea beans, which are also called samphire, glasswort, sea asparagus and chicken feet. (More on that plant here.)

To my knowledge, you can’t grow sea beans in a regular garden, but I’ve tried growing its cousins several times. My first try was a Japanese version called okahijiki, Salsola komarovi, for which you can buy seeds here. It’s nice enough, but very floppy.

After that, I went Italian and grew agretti. I get my agretti seeds from Seeds from Italy. They’re not cheap, and growing it is always a gamble because the seeds have a very low germination rate, about 40 percent, and a short shelf life — only about 6 months.

I live near Sacramento, California, so I was able to plant my seeds at the beginning of April. By early June they are ready to harvest, fully grown but before they have set seed. Once germinated, growing agretti is easy: Just add water. No fertilizer needed and they are drought tolerant. Just give them at least six hours of sun per day.

You will see many pictures of agretti plants at the market that have been pulled up by the roots; I don’t recommend this. It’s main stem gets woody, so it’s best to snip off what you want and let the plant keep growing, ultimately to sprout little yellow flowers, and then largish seeds. Let that happen in your garden, and you never need to buy more seed.

So how to cook agretti? In a word, simply.

I primarily eat it as a sort of vegetable mimic to angel hair pasta, along with grated parmesan, lots of garlic and olive oil, plus a little lemon juice, black pepper and a hint of anchovy. Fantastico!

Agretti is also very good mixed into an omelet or quiche or frittata, steamed by itself along with the flavors of my pasta dish above, as well as tossed in a salad raw. Beyond that, agretti is an excellent addition to potato salad, or really any crunchy salad.

Do not overcook your agretti! The whole point is for it to be bright green and still a bit crunchy. Agretti tastes slightly salty, minerally and “green” in the way that good spinach does.

Nutrition information is hard to come by, but happily, I can read Italian. According to Italian sources, a 100 gram serving (slightly less than a quarter pound) has 17 calories, 2.2 grams of carbs in the form of sugars, 1.8 grams of protein and 2.3 grams of fiber. Agretti is also a good source of vitamins A, C and B3.

As a side note, a variant of agretti grows wild in California’s Bay Area.

Here’s my primary agretti recipe, a simple pasta recipe. Hope you like it! 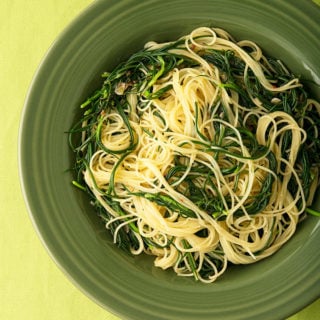