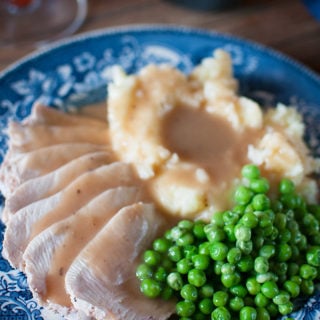 Holly and I often have quiet Thanksgivings. Many times we wake up early, head out to hunt for a little while, then kick back with some football and an easy dinner. Roasting a whole turkey, especially a wild one, is not what I call an easy dinner.

But you gotta have turkey with gravy on Thanksgiving, right? True enough, but who says you have to have the whole turkey? Poached turkey breast is the answer.

Poached turkey breast is an easy way to have a lovely Thanksgiving for a couple or small family. I am using wild turkey here but any sort of turkey you can find will work.

If you want to go the extra mile, you’ll need a couple turkey wings (skinned or plucked) to make some broth (and to help the gravy), but you can use store-bought chicken broth instead. We like to use a full turkey breast, which runs about 2 1/2 pounds, but you can cut it in half if it’s just the two of you.

What makes this different from everyone else’s “simple Thanksgiving menu” is the way I cook the turkey and the gravy.

You start with the gravy, which hinges on sherry and those roasted turkey wings that are turned into a simple broth — but again, like I said, you can use regular chicken broth instead. But you need enough broth so you can poach the turkey breast very gently.

Poaching keeps the meat super moist, and is infinitely better for a piece of skinless breast than roasting or pan-frying. Finish it off with some wild mushroom stuffing or simple mashed potatoes and a vegetable of your choice and there you have it: Traditional, with a bit of modern technique.

Even if you skip the Thanksgiving gravy and side dishes, I urge you try poached turkey breast: It is so much juicier and really lends itself to whatever gravy or sauce you feel like using that day. Other great options are Southern red eye gravy, and maple bourbon gravy. 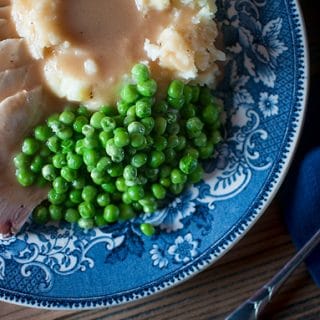 Perfectly poaching a wild turkey breast is easy, but you need to know a few tricks before you begin. First, start with meat that is room temperature. This means taking the breast out of the fridge and letting it sit for 30 minutes. Second, quick-cure it by salting the breast heavily on both sides when you take it out; this seasons the meat as it comes to temperature. Third, use a good broth. And finally, never, ever, ever let the broth even simmer. You just want it to steam at 155°F to 165°F. If you let this boil or even simmer strongly, the meat will dry out and get tough.
Prep Time30 mins
Cook Time30 mins
Total Time1 hr
Course: Main Course
Cuisine: American
Servings: 4 people
Calories: 355kcal
Author: Hank Shaw