In Mexico, mahi mahi is called dorado, and it’s served all over that country’s coastal regions, especially in the Pacific. This is a simple dorado recipe with a cilantro sauce you can use whenever you happen to have some.

And I suppose the sauce would be perfectly fine with other fish, too, like grouper, pargo, seabass, wahoo, etc. What makes this dorado recipe so easy is that it’s basically pan seared fish fillets with a simple cilantro sauce that can be made ahead.

The sauce consists of roasted white onions, garlic and green chiles like Anaheim or Hatch or poblano, lots of cilantro, some lime and water. You can add Mexican oregano if you want. Buzz it in a blender and you’re good to go.

You can cook the sauce in some oil, as I did in the picture, or leave it raw; the vegetables will have been cooked anyway. Cooking deepens the flavor but turns the cilantro sauce a little darker.

I cook the dorado in this recipe exactly the way I do in my pan seared mahi mahi recipe, which is served Cuban style with black beans, rice and a salsa.

Short version: Get a pan hot, get high smoke point oil hot (canola, rice bran, avocado, peanut, safflower, etc.), set the piece of fish down and jiggle the pan the moment it touches — this is important, otherwise the dorado will stick to the pan.

Sear hard only on one side, basting the other with the hot oil to cook it. If you have really big dorado, you can flip and sear both sides; “really big” means thicker than about 1 1/2 inches.

Rounding out this dorado recipe is some rice — and I often put some cilantro sauce in there, too — slices of avocado, and pepitas. If you’re not familiar with pepitas, they are hulled pumpkin or squash seeds. Easy to find at convenience stores or supermarkets. 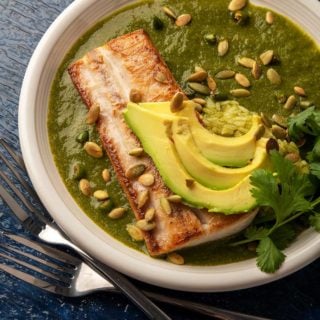 If you want to cook the cilantro sauce, add it to the pan after all the fish are done. Swirl it around, drop the heat to low, and scrape up any browned bits off the pan with a wooden spoon.