If you’ve read any foraging book written over the past 50 years, you’ve probably read about how wondrous the mystical, magical cattail is: Pantry of the marsh! Supermarket of the Swamp! Weee!

Don’t believe it. Yes, there are lots of edible bits and pieces of the cattail, Typha angustifolia and its cousins.  You can make flour from the rhizomes, you can eat the green “cat’s tails,” and you can eat the inner shoots of the stalks. I’ve done it all, and in each instance it’s been a case of “That was great. Let’s never do this again.”

Making the flour is arduous and the resulting flour boring, the green cat’s tails taste like hippie food to me, and the inner shoots are so mucilaginous they’d be great as an okra alternative, but for little else.

That leaves two final cattail products: the young racemes and shoots under the mud, and the pollen. I happen to love the young racemes, which are the growing tip of the older rhizome. Crunchy and a little sweet, they are something to hunt for when you are duck hunting and the birds don’t feel like flying. It’s the pollen, however, that is my favorite part of the cattail.

It is a shockingly vibrant canary color, with a mild floral aroma and just a little hint of nuttiness. Flavorwise, it’s not very strong. In fact, there’s not a lot of flavor at all. But the pollen contains about 14 to 22 percent carbs, somewhere around 17 percent protein and anywhere from about 2 to 7 percent fat (depending on the species).

I suppose the high protein content is nice, but I really use cattail pollen as a sort of North American saffron or turmeric — I want that awesome color. The classic recipe is to mix cattail pollen with flour to make muffins or pancakes. I might do that someday, but I am a pasta guy at heart. So I had pasta in the brain as I went out the other day to collect some pollen.

How do you do this? I’d like to thank my colleague John Kallas for the best method ever. Find a plastic gallon-sized water or milk jug. Make sure it’s clean and dry and that you have the cap. Get some scissors. Pick the jug up by the handle, only upside down. You want the cap facing down. Now use the scissors to cut a 3-inch hole in the other side of the jug just opposite the handle. You now have a cattail pollen harvesting device.

You use your cattail pollen harvesting device like this: Find cattails where the cat’s tail is green, or just beginning to brown. You should see a scruffy section just above the “tail.” It should be vaguely yellow. Bend the cattail over and insert this scruffy, vaguely yellow thing into the jug. Shake the cattail back and forth a bunch of times so the pollen flies off into the jug. It will collect at the bottom. You should get about 1 tablespoon per cattail, if you time things right.

Note: If you are interested in this, watch your local cattail patch! Pollen season can last only a week or so, so get while the gettin’s good.

Once you have your pollen, use a flour sifter or somesuch to screen out the fluff and any critters wandering around in the pollen. I’ve never stored the pollen for a long time, but if I did I’d put it in a glass jar and freeze it.

Since I was out in the area gathering cattail pollen and I knew I wanted to make pasta, I kept my eye out for any other wild edible plants to serve with the pasta. And lo and behold I noticed that our local coyote mint was in bloom!

Coyote mint is NorCal’s lowland version of a very common Sierra Nevada minty thing called mountain pennyroyal; I’ve written about pennyroyal before.  Coyote mint is also known as Monardella villosa. Monardellas and monardas are “mints,” but are closer in flavor to oregano. Think of them as the illegitimate love children of oregano and regular mint. Awesome, complex flavors that really come through almost any dish — they are as strong as cattail pollen is mild.

Once I found the coyote mint, I knew I had my dish. With such beautiful ingredients, go simple: Pasta, good Sacramento olive oil, freshly ground black pepper, the coyote mint and maybe a squeeze of lemon from our backyard lemon tree.

The essence of good Italian food is purity of ingredients left to shine on the plate. This is my Sacramento version. Enjoy. 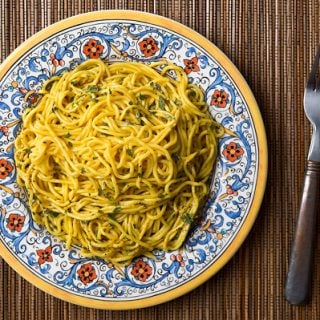 There is really no substitute for the cattail pollen in this recipe. However, you can make a very nice yellow pasta with either a lot of egg yolks or with some saffron crumbed into warm water. Similarly, there is no exact substitute for coyote mint, but many of North America's native monarda and monardella species, collectively known as "bee balms," work fine. You might have it in your garden. You can also sub in a little mint mixed with a little oregano, or just just straight-up oregano. T his would be the place for that really expensive olive oil you have on your counter, by the way.
Prep Time1 hr
Cook Time20 mins
Total Time1 hr 20 mins
Course: Pasta
Cuisine: Italian
Servings: 6 people
Author: Hank Shaw