This is a rustic but delicious pheasant pie recipe I was inspired to make after reading Fergus Henderson’s The Whole Beast: Nose to Tail Eating. Fergus has a recipe for pheasant and pig’s trotter pie, and this is reasonably close to that recipe, but not quite; I can’t help messing with things, I guess.

All this pheasant pie recipe is is a thick stew of pheasant, pork broth and shredded pigs trotters, with some potatoes thrown in for heft and a top crust that is essentially a pie crust with some goose fat in it. Can you use chicken? I suppose, but find a stewing hen from an ethnic market.

The key to success here is really the pig trotters. No, there’s no real meat on them, but I can think of nothing that has more ooey collagen and rich fat than a hog trotter; you can get them from a butcher, or a Latin or Asian market.  You first make a broth with the trotters, along with other cheap pig bits (tail, ears, etc.) if you have them, carrots, celery, carrots, and herbs.

This broth becomes the glue for the stew. There’s so much gel in it that the pie sets up even while hot. Trust me, it’s not like Jell-O  — although it is when cold. It’s really the perfect foil for the pheasant, which, while flavorful, can tend toward dryness.

If you don’t have access to pig’s trotters, I suppose you could use other bones, or you could slip a sheet of gelatin into the broth.

The pie crust is thick and acts more like a drop biscuit dough, but even though it’s very rich, it sops up some of the stew juices and becomes an integral part of the dish. Can you skip it and just eat this as a stew? Sure. But then it wouldn’t be a pie…

Make this dish when it is cold out. It is a perfect lunch after shoveling snow or walking in a winter wood.

One more thing: Guinness stout is probably the best accompaniment I can think of for pheasant pie, but I suppose you could drink a burly, tannic wine. Maybe a Petit Verdot or a young California Cabernet Franc?

Looking for something a little different? Try my venison and kidney pie, my Italian venison pies, or my Appalachian squirrel hand pies. 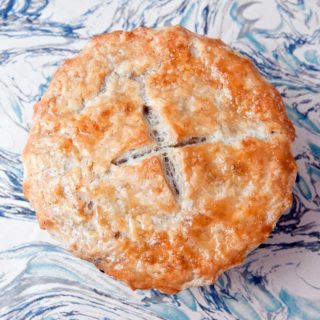 Any poultry will work here, and I often use turkey, rabbit or partridges. See the headnotes for alternatives to pig's feet for the broth. You can't skip the gelatin, though, since it is what holds the pie together.
Prep Time20 mins
Cook Time4 hrs
Total Time4 hrs 20 mins
Course: Appetizer, lunch, Main Course
Cuisine: British
Servings: 8 servings
Calories: 615kcal
Author: Hank Shaw