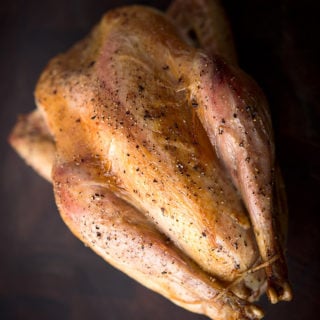 When life gives you a beautiful pheasant, one that you have not shot up or that was raised in a pen, you should roast it whole like a chicken. But a pheasant is not a chicken — it can get dry and ugly very fast if roasted poorly. That’s where this recipe comes in.

This roast pheasant recipe, unlike many of the others you may have seen, relies on a few special tricks. One is an eight-hour brine; this will season the bird and help it to retain moisture. Brining is a critical step when roasting lean game birds such as wild turkey, pheasant, sharptail grouse, or even smaller birds such as chukars or quail.

You risk dry birds if you skip this step.

Note that prep time does not include optional brining time.
Tried this Recipe? Tag me Today!Mention @HuntGatherCook or tag #HankShaw!