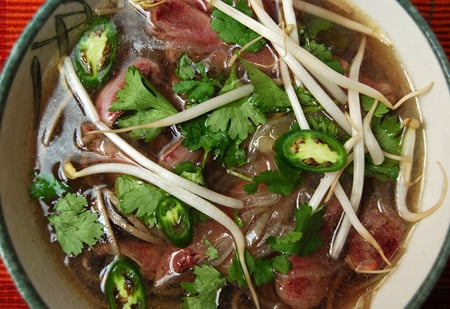 This is pretty time-consuming on the front end, but once you make the broth this comes together quickly. Pho, pronounced “fuh,” is a classic Vietnamese recipe typically done with beef. I switched up and substituted wild duck, and the result is very satisfying. Don’t try to skip the broth-making here — the broth makes or breaks a good pho, and besides, this is a perfect use for leftover duck carcasses!

Once made, the broth can be frozen for months or refrigerated for a few days. When you serve, have everything set out beforehand and bring it all together quickly.