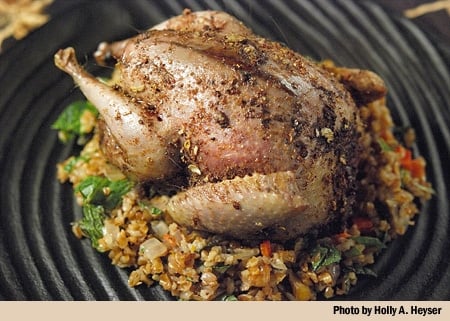 No one cooks pigeons the way the Muslims do. Period. From Morocco to Persia, the Islamic world loves its pigeon — squab is just a young, domestically raised pigeon.

, which has lots of pigeon recipes. I made the Turkish version; the original is from Egypt, where raising pigeons is an art.

I use wild pigeons, which are not as tender as squab but which have far more flavor. Seasons on them are liberal — there is none in California — and if you shoot barn pigeons fat on grain, they are wholesome and delicious. I don’t recommend eating city pigeons.

The key to cooking with wild pigeons is to brine them for 6-12 hours first. This keeps them from drying out in the cooking process, just like a turkey. I use a solution of 1/4 cup kosher salt to 4 cups water.

The stuffing can be made in advance, but everything should be eaten hot in the end. To drink I’d recommend a medium-bodied red wine, or, to be Turkish, some raki.