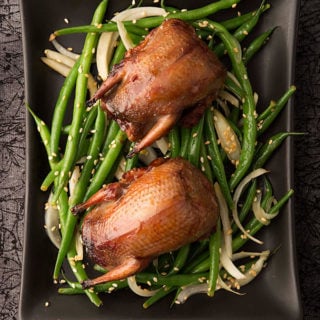 Teriyaki is one of the most beloved flavors in the American hunting world, and there is a reason: It is sweet, salty and flavorful all at the same time, and the caramelization you get on something grilled with teriyaki sauce is wonderful.

My version of teriyaki doves is taken from traditional Japanese teriyaki, which is most often done with chicken. You marinate the doves (or squab, pigeon, teal, snipe or quail) in the sauce, reduce the sauce to a glaze, then grill the birds, basting with the sauce.

You can also slow barbecue your teriyaki doves by putting them in a grill, covered, set around 225°F for about 45 minutes to 1 hour. Baste every 15 minutes.

I add a little extra zip with some sesame oil and sesame seeds at the end. Serve with a salad of whatever happens to be in your garden or is fresh at the moment, along with some steamed rice.

This recipe can be doubled or halved.

This recipe calls for homemade teriyaki sauce, which I think is better, but you can of course use a store-bought teriyaki sauce. The longer you marinate the doves in the sauce, the stronger tasting and saltier they will get. I like to keep them in the marinade only an hour.
Prep Time15 mins
Cook Time15 mins
Marinating time1 hr
Total Time30 mins
Course: Main Course
Cuisine: American
Servings: 4 people
Calories: 537kcal
Author: Hank Shaw