While there is indeed a recipe for venison stir fry at the end of this post, I want to talk more about technique than any specific recipe. I want to show you a Chinese trick that will make any wild game meat tender and juicy. Learn this technique and you will never go back.

I am assuming you’ve had Chinese food at a restaurant, right? Ever notice that the meat is never dried out? There is a reason for that, and that reason is called “velveting.” Velveting is the process of coating the meat with a delicate layer of ingredients, usually involving some sort of starch, and then stir-frying it.

It’s not so much a batter as it is a gossamer layer of protection for what is typically very lean meat. And those of us who cook wild game a lot know all about very lean meat.

I’ve now velveted everything from rabbit to duck to pheasant to venison, and the trick works on any meat. It is a great way to highlight leg steaks or pheasant thighs, but it’s best with lean, tender meat such as backstraps or breast meat.

There are lots of ways to velvet meat. Some are uber simple: Marinate it in soy, cooking wine and corn starch and proceed to the stir frying. This works pretty well.

A better way, however, is to “pass through” the coated meat in lots of reasonably hot oil. It is the same general idea as double-frying French fries. A quick bath in 275°F oil sets the velvet coating, and helps the meat hold up better under the ferocious heat of a proper stir-fry.

The downside is that you need to use a couple cups of oil. But, you can strain and save the oil for several uses, so it’s not all that bad.

The result will give you that “ah ha!” moment when you realize you have cracked one of the secrets of Chinese cooking. No matter what you include in your venison stir-fry, if you do this velveting trick you will be overjoyed with the texture of the meat. Give it a go. You’ll see.

I have a few other Chinese-inspired venison recipes, if this isn’t exactly what you’re looking for, including kung pao venison and Sichuan venison with cumin. 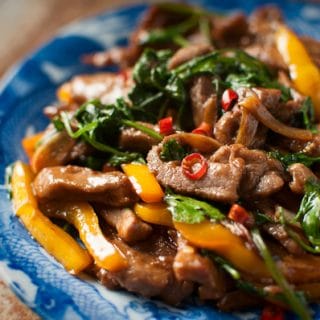 Consider this a master recipe for any stir-fry you might want to throw together on a Wednesday night. The most important thing is to remember the ingredients and the proportions of the velvet marinade. Everything else is your choice. When making any stir-fry, the work is in the chopping, so do everything before you heat up the wok. Speaking of which, if you don't have a wok and you like Chinese food, you really ought to get one. But a large saute pan will work in a pinch. Also make sure to use your most powerful burner for stir-frying. If you really want to do it right, use one of those outdoor burners that can kick up to 40,000 BTUs.
Prep Time20 mins
Cook Time5 mins
Total Time25 mins
Course: Main Course
Cuisine: Chinese
Servings: 4 people
Calories: 225kcal
Author: Hank Shaw