Anyone who’s ever cooked any sort of turkey, wild or domesticated, knows that the breast meat can get dry in a hurry. Smoked boneless turkey breast chief among them.

That’s because a boneless turkey breast doesn’t have the breastbone to protect it from drying out. Fear not, however, I’ll show you how to go about it.

The end goal is that tender, juicy turkey breast, smoky, maybe a touch sweet, but you don’t want it dry as the Sahara, or with the thinner, tail end of the breast turned into jerky.

I do this with two techniques: First, slice off the triangular tail end, and use that for another recipe, like maybe turkey parmesan, and just smoke the thick part. Here’s how you cut it:

The second technique is to brine or salt cure the meat: That’s the secret to fantastic smoked boneless turkey breast.

And while you can get away with not brining a store-bought turkey, smoking a wild turkey breast requires a salt brine. Period. If you are not familiar with what brining does, it uses the power of salt and osmosis to slightly denature the proteins in the meat, swelling them with salty moisture and trapping more liquid in the meat than it would otherwise be able to contain.

So when you cook it, and you get the inevitable moisture loss that heat causes, there was already so much moisture in the brined meat to begin with that it remains juicy.

I use what is called an equalization cure for my “brine,” which is not really a brine. It’s dry salting. You do this by weighing the turkey breast in grams — yes, you need a scale

— and then weighing out 1.5 percent of that weight in kosher or sea salt. Add to this some brown sugar (that weight need not be exact) mix and massage into the turkey breast.

Ideally you’d vacuum seal it and set it in the fridge for at least 3 days, and really up to a week or more — this cure will not make the turkey breast too salty, unlike other ways of brining or salt curing.

Once you have that set, you need to dry the turkey breast to form what’s called a pellicle on the surface of the meat. A pellicle is a thin sheen or skin of denatured proteins that, when it dries out a bit, becomes tacky. This allows smoke to adhere to the meat far better then if you put wet meat into a smoker. This is an important step in smoking ignored by a lot of amateurs. Don’t be that guy.

I like smoking over fruit woods (cherry in this case), but you can use whatever. Oak, hickory, walnut, beech, alder, mesquite… Whatever you want will be fine, only no conifers! Pine pitch and turpentine are not good eats.

To give the turkey one last punch, I paint it with something sweet. I used honey here, but maple syrup, birch syrup, agave nectar, a fruit syrup or even molasses would work. Why do this? Um… is there a person on earth who doesn’t like the combination of sweet-salty-smoky-meaty?

I didn’t think so.

I generally use a smoked boneless turkey breast as lunch meat, for sandwiches. But if that’s not your thing, make a meal out of it and serve your smoked turkey warm. Maybe with a gravy. You can also slice, then roughly chop, your smoked turkey for the meat in turkey tacos.

Once made, this will keep about a week in the fridge, and it freezes well. 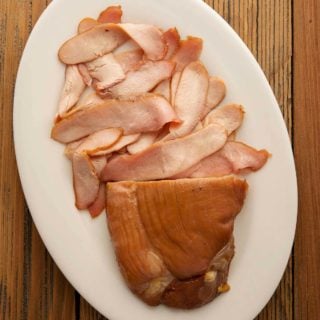 To trim, I slice off the thin triangle of turkey breast that lays over the tail end of the breast -- you will notice that all bird breasts have a thick and a thin end, and you are trimming the turkey's breast so you have, more or less, a big cylinder of meat that smokes better.
Prep Time20 mins
Cook Time4 hrs
Total Time4 hrs 20 mins
Course: Appetizer, Cured Meat, Main Course
Cuisine: American
Servings: 6
Calories: 92kcal
Author: Hank Shaw

Once made, the smoked turkey will keep in the fridge for a week or so, and can be frozen (vacuum-sealed is my preference) for up to a year.