I’ve eaten a lot of preserved or pickled artichokes in my time, but this recipe is the best I’ve yet found. This is a riff off a recipe I found in Eugenia Bone’s Well Preserved, one of the better pickling books to come out in recent years.

I’ve been known to cruise the farmer’s markets late in the morning, eyeing the artichoke vendors. Why? Near the end of the day’s market, the farmers are more willing to sell their stock at a discount. And since I eat a lot of these artichokes, I need to buy a lot. And even here in California, artichokes aren’t cheap.

Why bother with these pickled artichokes? Because they are simply flat-out better than anything you can buy. I am not just saying that. You know when you buy pickled artichokes, and they’re kinda squishy? Soft? These aren’t. These stay firm for months in the jar.

They will soften eventually, though, so eat them within about nine months.

You will want to buy small artichokes for this recipe, and, thankfully, I am seeing packages of “baby” artichokes for sale in supermarkets now, so you have a store-bought option if your local farmer’s market doesn’t have artichokes, which is likely.

Processing all these baby artichokes will take some time, and, well, generate a lot of waste. What to do with all the artichoke leaves you have pulled off to get to the hearts? Make artichoke soup. There is an amazing recipe for this in one of my all-time favorite cookbooks, Cooking by Hand: A Cookbook by Paul Bertolli.

If you’re interested in real-deal Italian cooking, not just for that artichoke soup but for all sorts of things, buy Bertolli’s book. You won’t be sad. 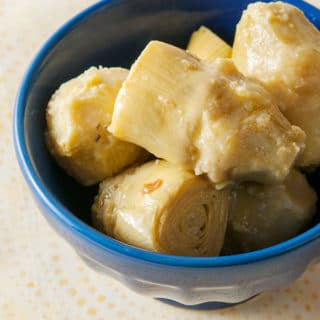 The key here is to use small artichokes, babies really. You can use large 'chokes, but it is a lot more work and you will need to chop the hearts into three or four pieces. Small artichokes are a commonplace in California farmers' markets, but you might need to order them if you live in a colder clime. But it's worth it. These chokes are firm, fresh-tasting and absolutely delicious -- nothing at all like the preserved artichokes you get in the store.
Prep Time45 mins
Cook Time20 mins
Total Time1 hr 5 mins
Course: Snack
Cuisine: Italian
Servings: 16 servings
Calories: 233kcal
Author: Hank Shaw