Home » Essays and Stories » NOMA: Time and Place and Meaning

The deeper I delved into the pages of Noma: Time and Place in Nordic Cuisine, the more depressed I became. Every page screamed at me: You can’t cook from this book — and what’s more, you’re not supposed to. I picked the book up and set it down a dozen times. Then, at some point — I cannot say precisely when — the revelation struck me like a boot to the head: Oh yes you can! And what’s more, you must.

Noma, the cookbook from the renowned Danish restaurant of the same name,  is an enigma, as unapproachable as its granite cover. The book itself is as beautiful as are the people and the landscapes of Scandinavia, yet, like them both, is slightly cold, or maybe aloof. One look at the book, and at the food within, and you know you are not looking at anything remotely Mediterranean. Noma’s food is simultaneously enticing and forbidding.

Noma Chef Rene Redzepi’s intricate plating and flawless, modernist technique call to me. But his intensely local cuisine is frustratingly impregnable. Each time I decided to attempt one of his dishes, I kept stopping short when it came to the ingredients. Apple balsamic vinegar. Rowan shoots. White currant twigs. Birch syrup.

Mind you, you are hearing this from a guy who doesn’t blink when faced with many of Noma’s other odd ingredients. Spruce tips? No problem. Musk ox loin? Not too different from venison. Wild wood sorrel? Easy-peasy. Dulse? OK, so that one I may have to drive to the Pacific to obtain, but I can get it.

At first I paged through Noma like an old Playboy — for the pictures. Redzepi’s plating is some of the most beautiful I have ever seen in my life. Thoughtful. Balanced. Achingly aware of color, and texture, and temperature.

And the flowers! I have always hesitated to use edible flowers in my cooking because I remember the Great Flower Explosion of the 1980s. Flower salads. Flowers everywhere. Blech. Who the hell wants a giant orchid sitting next to your chicken breast? But I tell you folks, if you have this book, look at the dish on page 146. I couldn’t stop staring at it. It is terrifying to imagine the thought that went into that plate. It is as unearthly as Lady Galadriel. 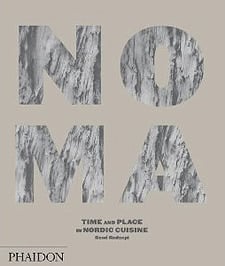 After I absorbed the images, I began to pore over the recipes themselves. They require the same courage and skill it takes to navigate a longboat from Denmark to Greenland. If you do not know the fundamentals of modernist cuisine, as well as advanced techniques in regular kitchen cookery, you will become bogged down in a morass of instant food thickeners and lost in a thicket of vacuum bags. Mercifully, I possess at least rudimentary competency with this sort of stuff.

But always it came back to those ingredients. A few, like Redzepi’s grilled lamb shank with ramp leaves, golden beets and elderflowers, I can replicate — and plan to, once the elders around here bloom in six weeks or so. But most of his dishes can only be made where he lives, in Scandinavia.

That, in and of itself, is a towering achievement. Any halfwit can be fresh-local-seasonal here in Northern California, which is a fair approximation of the Garden of Eden. Something wonderful is always growing here, and in winter this place looks as green as Ireland. But to do seasonal-local in Denmark, now that requires a river of ingenuity and some deep meditation on your menus. Most importantly, it also requires a commitment to stretching your regional boundaries of what is and is not “food.”

It is this last point that led to my epiphany.

That is Redzepi’s challenge, his thrown-down gauntlet. It is a gauntlet I intend to pick up.

So I sat down with my notebook on an early March morning and thought. What, exactly, would a dish look like that spoke of Northern California at the dawn of spring? It starts with ingredients: Black trumpet mushrooms, hedgehog mushrooms, stinging nettles, wild lettuces and radishes and mustard, miner’s lettuce. For protein, I could use meats from my freezer or mussels from the seaside, but I chose instead to use some fresh pheasant breast from a bird I’d shot at a preserve a few days before.

Ingredients chosen, the question then becomes how to present them. To me, all great dishes must have a variety of colors, textures, temperatures and flavors. Crispy with smooth, sweet with savory, base colors brightened with the vibrant greens and yellows and lavenders that speak spring to us. This is what I came up with:

I call the dish “Spring Pheasant with Mushrooms.” It’s how I expressed Northern California’s spring awakening. Others might interpret this time and place in an entirely different way — and so might I, if I had to do this again.

The pheasant breast was cooked sous vide with smoked salt and pheasant broth for 45 minutes at 148 degrees. I sliced the skin of the pheasant into slivers and crisped it in some more pheasant fat. It is served over stinging nettle spaetzle tossed with lemon, alongside fresh black trumpet mushrooms sauteed in pheasant fat as well as a slice of a giant hedgehog mushroom grilled with fleur de sel. Wild radish and lettuce flowers garnish.

The dish was everything I wanted it to be. Varied, vibrant and pretty. Everything tasted of itself, but each element worked well with its neighbor. Black trumpets are among the most savory of our mushrooms, and actually anchored the dish more than the pheasant. The pheasant itself was good, although I probably should have dropped the temperature a bit. The crispy skin was essential, and the smoky grilling on the hedgehogs, which taste light and floral, tied that mushroom in with the rest of the plate. Grounding everything was the vivid green of the nettle spaetzle, brightened up with some Meyer lemon juice and zest.

It is as close to a perfect dish as I have yet achieved. And I have Noma, and Chef Redzepi, to thank for that. They have opened a path I can follow to make truly unique food that takes advantage of whatever local ingredients are on hand where I am, both wild and domestic. And not just here in NorCal’s Garden of Eden. This can be done anywhere, at any moment. I will be traveling a lot this year, and will be putting this to the test. There will be more such dishes, I assure you.

This is not a quick and easy dish, but nor is it impossible. Replicating it exactly could be tricky, but I provide substitutions below for some hard-to-find ingredients. The balance of flavors here is important, as are the cooking techniques. Make this dish when you are not rushed, and you will be fine. But there are a lot of little details you need to follow to pull it off.