Home » Foraging » All About Lambsquarters, or Huauzontles

For the life of me I cannot understand why people hate on the chenopods: Lambsquarters, its Mexican cousin huauzontle, salt bushes and all their various goosefoot friends. All are fantastic greens, with edible flowers and seeds, one of which I am sure you know: quinoa.

I grow two in my garden. I planted huauzontles, Chenopodium nuttalliae, and well, if you look pretty much anywhere, you will find lambsquarters, C. album. These and all their chenopod friends share the same leaf pattern, more or less, and all are incredibly drought tolerant and do just fine in crappy soil.

They are all related to amaranth, but while all chenopodium species are amaranths, not all amaranths are chenopodium. I happen to be growing a true amaranth, too, but that’s for another post. And as you can see on this map, some species of lambsquarters, or something very much like it, lives near you.

As for my huauzontle, it’s basically the common lambsquarters on steroids. Bigger, leafier, with larger seed heads, it is clearly what the Aztecs wanted after breeding many generations of regular lambsquarters. It is mostly eaten in the center of Mexico, in soups (see below), or made into several kinds of fritters.

It wasn’t just the Aztecs who cultivated lambsquarters. Scientists are fairly certain that a variety of Eastern Native American groups cultivated their own goosefoot, C. berlanderii, which is very closely related to huauzontle, as far back as 3800 years ago.

Europe also has its cousin of lambsquarters, called Good King Henry, but it is not, technically speaking, a chenopod. That said, you can use Henry in any recipes that call for lambsquarters or huauzontle. Africa and Asia also grow C. album.

So what happened? Why did these plants get tossed from a valued place in our gardens to the weed heap?

If I had to guess, it is because of those damn brassicas, and their friends spinach and chard. Think about it: Lambsquarters and its cousins have delicious green leaves, but they are not terribly large compared to our modern greens like collards, chard or even spinach. Spinach, incidentally, is also an amaranth.

And, while we still love broccoli, we seem to have forgotten that the teeny “broccoli” tops on the various chenopods are just as good, if not better. We do at least still eat the dried seeds as quinoa or amaranth.

It is notable that in the hot regions of this world, lambsquarters still has a place in the garden. Sacramento, California, where I live, being one of those hot regions.

The reason is simple: You try growing a leafy green of almost any other variety in temperatures consistently over 95°F with humidity often dropping below 15 percent. Spinach won’t last a week in that. Yes, there are other hot weather greens, like New Zealand spinach and Malabar spinach, but the chenopods are easier to grow.

How to cook your lambsquarters? Lots of ways.

Obviously they and all their chenopod cousins, hell, add in all the amaranths and orach and atriplex relatives, too, are an excellent substitute for spinach or some other leafy green. That’s how I use them most often.

Some parts of the country call lambsquarters “bacon weed,” because, well… fry up some bacon, remove and chop it, cook a mess of lambsquarters in that bacon fat, maybe with some onions and garlic, add back the bacon as well as a splash of vinegar and you’ll thank me later.

The young seed heads can be eaten like broccoli, added to fritters or soups, as you will see in the simple huauzontle soup below.

The Indians (from India) call lambsquarters bathua and use it in any place you’d normally see spinach used; saag paneer springs to mind.

What if you have too much? Best to boil your lambsquarters in very salty water for 1 minute, then move them to a big bowl of ice water; this stops enzymatic activity and sets the green color. Squeeze out the excess liquid and vacuum seal them in the freezer.

If you are unsure whether you have lambsquarters in your yard, or anywhere else, for that matter, follow these steps:

You can also dry lambsquarters for use as a dried green thing in a winter soup.

Speaking of soups, this one is a favorite of mine. Super simple, I first read about it in the excellent book Eat Mexico: Recipes from Mexico City’s Streets, Markets & Fondas. It’s just a simple chicken (or other poultry or rabbit) soup, spiked with lots of huauzontles (lambsquarters), served over rice with some crispy tortilla chips. 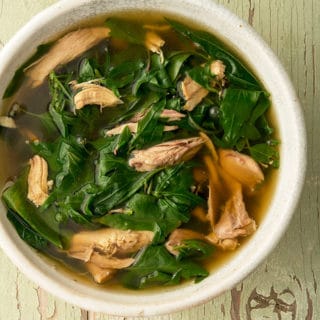 This is a simple lambsquarters soup from Mexico, where they are called huauzontles. I like to make this with wild turkey, pheasant or rabbit, but chicken is perfectly fine. I also like to steam some rice and put that in the bowl, then ladle the soup over it, to make it a more substantial meal.
Prep Time15 mins
Cook Time2 hrs 30 mins
Course: Soup
Cuisine: Mexican
Keyword: lambsquarters, wild greens
Servings: 8 people
Calories: 299kcal
Author: Hank Shaw

Home » Foraging » All About Lambsquarters, or Huauzontles 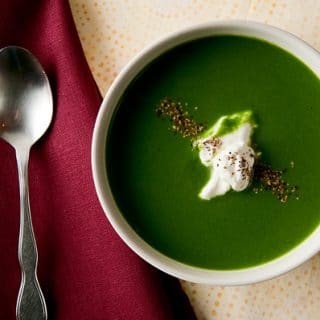 You can find all sorts of information about wild edible greens here on Hunter Angler Gardener Cook.