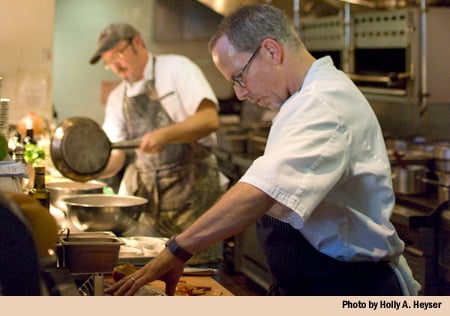 The Great Duck Off between Grange head chef Michael Tuohy and me is over, and chef was declared the winner — thanks to a masterful warm rillette he served with a pomegranate-persimmon salad, a dish declared the best of the day by the four judges: Sacramento Bee reporters Rick Kushman and Niesha Lofing, California Waterfowl Association president Bob McLandress and Darrell Corti of Corti Bros. grocery, considered by many to be one of the foremost experts on all things edible.

Am I sad? Hardly. Corti declared the match a draw and thought my confit of duck gizzards served with chanterelle mushrooms was the best dish of the day, and everyone agreed that my final dish, called Ducks in the Orchard, was the second-best dish of the competition. Honestly, I can probably die a happy man knowing that Corti has said good things about my food. 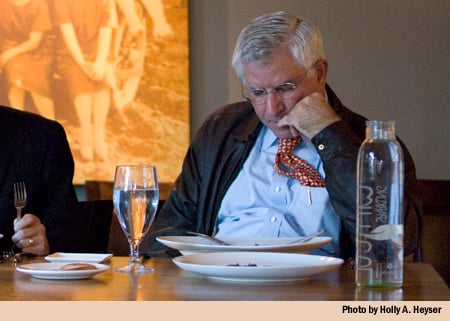 There is so much to tell about yesterday. My head still spins even as my feet still ache. The day was about so much more than a cooking competition — really the competition was almost a distraction to what really mattered to me, and to Chef Tuohy: Win, lose or draw, what we really cared about was that everyone who shelled out $65 a head to eat our five-course duck dinner went home happy.

Chef does this every day. But I’ve never had such a weighty culinary responsibility before, to feed maybe 100 paying guests a five-course meal that needed to be memorable. Dinner parties? No problem. Even my few catering gigs had been easy compared to this. I knew that some people would come to Grange just to eat my food, and I desperately did not want to disappoint them.

So I went to the restaurant Wednesday night to do prep with Michael. It was quiet that night, a good way to ease back into a professional kitchen — something I had not seen the inside of since 1993. I quickly learned that big kitchens require big tools. Cassoulet was cooling in a vat large enough to submerge a toddler when I arrived. 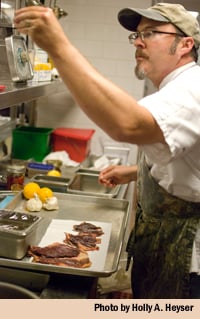 “You’ll need to scale up your pasta recipe by ten times,” Michael said when I unloaded my sacks of barley flour. Ten times? That’s a helluva lot of pasta. Fifteen pounds to be precise. Ever try to knead by hand five-pound batches of pasta dough, especially a dry one like barley flour? My arms felt like falling off by the time I had all three done.

Then it was on to the sausages. Michael and I had decided to use my Toulouse sausage recipe to make the links for both the cassoulet and the sausages stuffed in the ducks’ necks for the public menu. I found some nice herbes de Provence in the pantry so I added that to the recipe, along with a pinch of quatre epices, but it is otherwise the same as in the link above.

I normally make five-pound batches of sausage. We made 23 pounds that night — a lotta links. I stuffed most into hog casings for the cassoulet, but left a bunch to stuff into the duck necks later.

All the while, I was thinking about my competition menu, most of which I’d made at home in the past.

The first was a dish I’d decided to call, “The Way to a Duck’s Heart is Through His Stomach.” It was a trio of duck offal appetizers:

My second dish would be an Italian duck sugo with the same homemade barley-duck egg pasta we would serve the guests, only I had to make everything by hand that day. Not that easy, as I like to make that sugo a day ahead.

Last would be a French-inspired dish called Ducks in the Orchard, with  apples and a cider-cream sauce. I’d never made this one before.

When I arrived at the restaurant on the day of the Duck Off at 7 a.m., it was again quiet. Not for long, though. Things got rolling early when KCRA-TV showed up to do a live shot and interview with Chef Tuohy, and later interviews with me. Sadly, my interview apparently never aired, but the live shot can be viewed here.

All through the day Michael and I toggled between our own dishes and getting ready for a big night at the restaurant. Stuffing the sausage into the duck necks took some time, and I was absolutely amazed at how wide they were. My duck necks, from mallards and snow geese, are below: 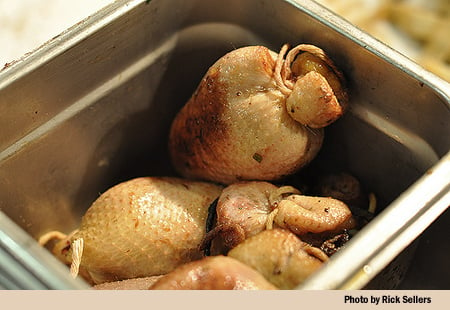 The domestics were so round they looked like baseballs. Startling the difference between wild and domestic…

Judgment was to be at 3 p.m. By 2:15 p.m., I was totally in the weeds. Holly had arrived to take some pictures, but I was barely able to say hi to her. I felt like throwing up. My mind raced. Time? Sausages won’t have smoked enough. Shit. Roast them off? No time. Pan-sear them. Apples? Where are the apples? Get the fat off that sugo. Time? Shit Shit Shit. Where’s the microplane grater. Containers? Where the hell is everything in this kitchen? When are we going to the upstairs kitchen? Oh God oh God oh God…

2:45 p.m. Fifteen minutes. “Load up this cart now,” chef said. I began scurrying for sheet pans to load my ingredients onto one of those 5-foot tall hotel carts you see on Top Chef and the like.

2:50 p.m. Chef begins rolling the cart from the prep kitchen up a little ramp to the service elevator. He rotates it so the food will not fall out, the wheels lock — and the whole cart falls over.

We both stood and stared at it for a second.

“GET THIS CART UP NOW!!” It was the only time all day Michael shouted. We righted the cart, grabbed the sheet pans and dashed them back to the kitchen to see what we could salvage. My cream was spilled. Much of my sugo was gone, along with half my pasta, two teal breasts, a couple gizzards and my prepped apples.

Strangely, as I collected the remnants of eight hours’ work and put it into a different cart, I felt eerily calm. OK, I thought, this will no longer be The Meal of Your Life. I had thought a lot about this meal and had wanted absolutely everything to be perfect, and I was getting nauseous trying to make it so in a foreign kitchen with another service ahead of me. After the crash, all this changed. Now it was, “OK, Hank, make some good food with what you have and make it happen. Adapt and overcome, just like the Marines.” 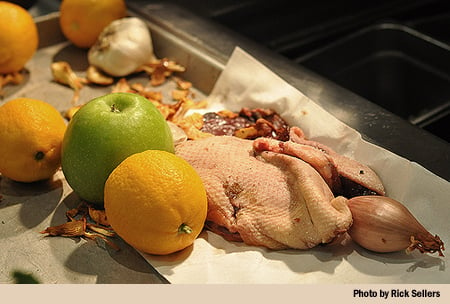 By the time we got to the upstairs kitchen, I had figured out how I would revise the Ducks in the Orchard dish, which was the most damaged by the fall. No complex apple cooking liquid. No French cream sauce. Simple. Italian. Sweet-hot-savory-sour. Make it happen. 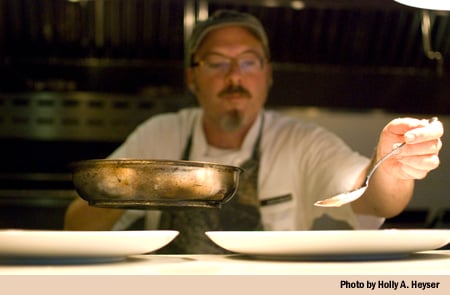 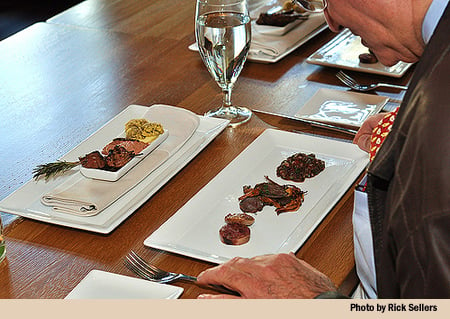 Second flight was my sugo, on which I put Meyer lemon zest and chopped lovage leaves, versus Michael’s warm rillettes with the pomegranate-persimmon salad. What was ironic is that while I apparently got dusted by Michael’s superb rillette, more diners called out the sugo as their favorite dish during the night’s service than any other course of the night. Wonder what would have happened if Chef had put the warm rillette on the public menu? 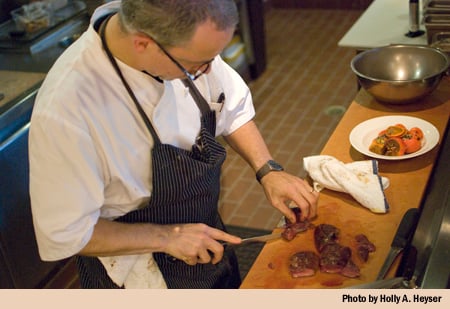 Last flight was pretty much a tie. Michael did a beautiful pan-roasted duck breast supreme with a celery root-parsnip puree and a moat of the best duck jus I have ever tasted. (must replicate it… ) My new Ducks in the Orchard was pan-seared mallard breast (Holly shot this one in Klamath) with apples sauteed in duck fat, topped with a little chile flakes, minced mint, reduced cider and a red Hawaiian sea salt for color and crunch.

This is the dish before the salt was added: 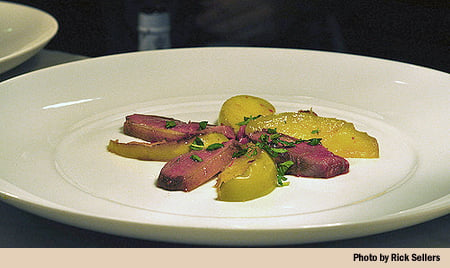 We served the judges, stepped away, and then it was over. On to the judging. 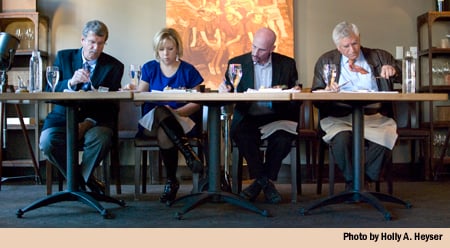 The judges were constructive and thoughtful. Lofing isn’t a huge fan of hearts. Corti likes his duck breast cooked longer than the medium-rare I served it. McLandress said if he had to die for one dish it would be the warm rillettes. And everyone liked my impromptu Ducks in the Orchard.

Some of this Michael and I heard later, because by then it was 4:45 p.m. and service began at 5:30 p.m. But the worst was behind me . All I still needed to do was help defat my sugo, pick meat from bones and toss it back into the pot, slice the duck necks and make sure the line cooks knew how I wanted my dishes plated. By 6 p.m. I was done.

So I cleaned up a bit, walked upstairs into the dining room, and saw a sea of people who had come to see our very own Big Night. My boss Bob from my day job was there. A few political friends were there, too. Elise and her family were there, as were Peg and John, who so graciously let us hunt on their land. I finally got to meet Rick Sellers of Draft Magazine.

But what shocked — and humbled — me the most was one couple who sat upstairs in a corner table. I didn’t know them, but I saw they were eating the duck menu so I said hello. They said they had driven all the way from Oakland to eat my food. Thank you for that, Leah, you are the reason I so wanted everything to be perfect. I want no one to be disappointed: Not the judges, not Chef Tuohy, not myself, my friends — and those friends I’ve not yet met.

I owe much of the night’s success to Chef Tuohy, who feels like a big brother to me after having now worked in close proximity with him for an intense 36 hours. I owe an equal amount of thanks and gratitude to the restaurant management as well as to Tuohy’s staff, from Brad Cecchi (Michael’s right hand man), to all the sous chefs, pastry mavens and line cooks who made it all happen. I salute you all for making an outsider feel at home immediately, and for teaching me so much in just a short amount of time.

Walking through that dining room last night, seeing all those people enjoying the food that Michael and I and all of the staff had put together, I felt like a king. I will never forget this night so long as I live. Thank you.

There was so much that happened, and so many images of the day, that Holly decided to make a slideshow to highlight it. I hope you like it: