Consider, for a moment, the sweet pepper. No other plant demands so much, gives so little, yet keeps us coming back for more.

Sweet peppers are the coquettes of my garden. I coddle them, dote on their every need, and in return they toss me a few fruits to play with — so few, in fact, that I can barely bring myself to eat them fresh. I preserve almost every one the little minxes give me to eat huddled, alone, in the dead of winter. Or something like that.

Every year I say, “I need to plant more sweet peppers.” Every year I plant a few more. It’s never enough. I could lay waste to everything else in my garden and plant only an array of red bells, piquillos, padrons, pimientos and sweet cherry bombs — and still it would not be enough. It is not possible to have too many sweet peppers. Chiles? Yes, but not sweet peppers.

What’s more, after these princesses deign to drop me a pepper or three, it has become so late in the season that they die soon afterward, our relationship barely consummated. It reminds me of some character in an Edith Wharton novel (And yes, I’ve read several. Blame my mother for that one…)

Disconsolate, I used to count the days until February, when I could start a new set of seeds under hot lights inside; even in birth, sweet peppers need to be the center of attention.

But then, one day, I found a way to cheat death.Yes, it is as simple as a heavy pot, a warm climate, and a quirk of biology.

I live in Northern California, and in my little spot of land, we get a hard frost only once every few years. Light frosts, which are enough to kill a pepper, come no more than a couple dozen times a year in my garden. But in the front of my house, which faces south, those light frosts come less than a dozen times a year, and even in the dead of winter the highs soar past 50°F — warm enough to keep a pepper alive.

But aren’t peppers annuals? No. And that is a dirty secret perpetrated by seed dealers everywhere. The coquettes aren’t eager to die after all, it seems. Only cold kills them. What they want is an even deeper commitment from you the gardener before they willingly give up their fruit. I once had a Thai chile — a Capiscum frutescens, for you pepper freaks out there — that lived five years. Peppers, like most of us, want a long-term relationship.

So I dig up a few of my peppers from the garden every October, pot them up and move them to the front yard, which is such a blast furnace in summer — routinely reaching 110°F — that it would burn most peppers; that’s why I don’t keep them in the front all year long. It works for me. And it would work for anyone who has a sunny window.

Here is a useful video of the process.

My Thai chile lasted in Minnesota until one day even the inner windowsill dropped below 30°F. (Outside it was -19°F, -30°F with the wind.) So it can be done. Once spring returns, you will find your peppers strong and ready to flower early and grow large. And mature peppers bear more fruit.

What to do with that fruit? Well, I’d venture to guess that everyone reading this has a favorite pepper recipe. I have lots on this site. But I also preserve a lot of peppers, less out of fear now than because preserved peppers take on a character totally unlike fresh ones.

My main method to preserve peppers is to roast them over an open fire, then preserve them with a little salt, vinegar and oil. Peppers lack natural acid, so need to be pressure-canned if you aren’t using vinegar or salt.

This way of preserving does a number of things. Roasting kills any enzymes in the peppers that might deteriorate them over time, as well as softening and sweetening the peppers — not to mention getting rid of the indigestible skins. I then dredge the peppers in vinegar to up the acid level and give the peppers more tang. After that I salt them liberally to make things even more stable; salt also adds to the flavor. And finally I cover everything in olive oil to keep air out.

Those of you in colder climates may be forced to choose which pepper’s charms most attract you, as you may not have space to save every one. And don’t be worried about the pepper dropping leaves in winter; it happens. Just keep it in a sunny spot, protect it from whiteflies, and keep it as warm as you can. It will repay you for your kindnesses next year. 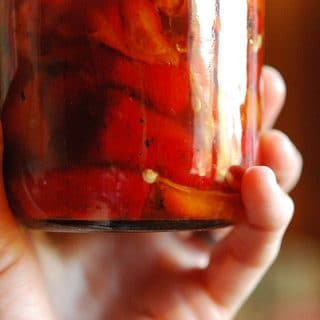 There are a lot of ways to preserve red peppers. You can pickle them, which is nice, but a little limiting; pickled sweet peppers are good for an appetizer, but little else. Once you roast the peppers, however, things change. Roasted peppers are a delight. I use them as appetizers like the pickled peppers, but also in sauces, stews and simply draped over roasted or grilled meat. This preservation method is inspired by an obscure English book by Nora Carey called Perfect Preserves. Carey uses a hybrid pickling, sott’olio method to keep her peppers delicious through her British winters. I’ve adapted it a little to reflect the hotter California climate.
Prep Time45 mins
Cook Time35 mins
Total Time1 hr 20 mins
Course: Appetizer, Condiment, Snack
Cuisine: Italian
Servings: 16 people
Calories: 37kcal
Author: Hank Shaw

I find about 8 red bell peppers fills the two pints, but obviously other peppers are of different sizes, so adjust accordingly. Better to have too many -- you can eat them as a snack or for dinner that night. These peppers are also integral to my all-time favorite wild game stew, a Spanish recipe called chilindron.