When I hauled a frozen sharp-tailed grouse out of my freezer, it all came rushing back: The endless plains, grassy hills, a chill in the air. Rose hips clinging to tucked-away places. Hawthorne trees grown slanted from the constant winds roaring down from Canada. North Dakota. Sharpie country.

Each of North America’s main environments has its own grouse: Ruffed in deciduous forests, blue and spruce in pine forests, ptarmigan in the tundra, sage in high desert, prairie chicken in short-grass prairie, sharpies in long-grass prairie. Unlike most of its cousins, the sharpie has dark meat throughout. Plucked, it looks  a lot like a giant dove or squab.

That dark meat is full of flavor and can hold up to all sorts of other strong tastes. Ruffed grouse can, too, but I often find that what makes chicken or quail special gets lost in bold dishes. Now I normally think of roasts and slow-simmered braises when I think about sharp-tailed grouse, but it’s summertime, and I eat a lot of main-course salads when it’s this hot.

This salad is definitely a meal in a bowl. Barley provides the bulk — I chose barley because it’s one of the main crops of North Dakota — lots of poached grouse meat make it interesting, and pretty little Sungold tomatoes add a brightness that makes this dish.

Feel free to play with this recipe: Use chicken thighs, or pheasant, or turkey. Skip the quail for this one, though; it’s too delicate. Cherry tomatoes look nice, but you can chop up normal tomatoes, too. No barley? Use long-grain rice, or rye or wheat berries. Enjoy! 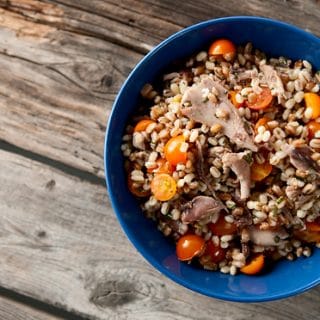 Grouse Salad with Barley and Tomatoes

The cooking method you use for this recipe also happens to make a great broth. If you have time, use this broth to cook the barley. If not, cook the barley in some chicken broth and reserve your grouse broth for another time. This salad is best served at room temperature. And while it does keep for several days in the fridge, my advice would be to keep the tomatoes separate if you plan on storing this salad -- tomatoes hate refrigeration, so you will be better off adding them right when you serve.
Prep Time15 mins
Cook Time2 hrs
Total Time2 hrs 15 mins
Course: Appetizer, lunch
Cuisine: American
Servings: 6 people
Calories: 585kcal
Author: Hank Shaw