I get asked a lot about my favorite wild game cookbooks, and my friend Jesse Griffiths’ Afield: A Chef’s Guide to Preparing and Cooking Wild Game and Fish

is always up there at the top of the list. Jesse lives in Texas, so the book has a Texas bent to it, but it’s applicable all over the country.

Here in America, we largely hunt the Wilson’s snipe, Gallinago delicata, and it is one of the last shorebirds we’re allowed to legally hunt. They are, along with the mourning dove, the smallest gamebird we chase. Little juveniles can weigh only a few ounces, and even a “giant” snipe will only weigh about six ounces.

Their small size isn’t the only thing that makes them challenging. Snipe can reach speeds of 60 miles per hour, and flush like a bat on methamphetamines, punctuating their flight with a raspy scaipe! sound that is one of your best indicators that what just flushed in front of you is indeed a snipe, not a dunlin, godwit or other shorebird — none of which are legal to hunt.

The national limit is eight snipe a day, and if you can do that consistently, you’re a sniper. Yes, that’s where the term comes from.

Snipe like to congregate in their wintering grounds, and Texas, where Jesse lives, as well as Northern California, where I live, are two such places. Florida is another serious snipe hunting area.

Flavorwise, they are something like a combination of grouse, dove and duck. I know, this won’t help you if you haven’t eaten these birds. Take my word for it: They’re delicious.

And weirdly meaty for their small size! More than a quarter of a snipe’s overall weight is its breast meat, the highest percentage of all birds.

I normally roast snipe when I get them in a very hot oven. But Jesse, being a Southerner, likes his fried. He has a recipe in his book Afield for Hot Fried Birds. that works with snipe, doves and quail. The birds are split, fried and doused with a mix of hot sauce, honey, butter and garlic. A few slices chiles rounds it out.

You need to split the birds to do this. Use shears or a sharp knife to remove the keelbone of the bird. This is one of the larger bones in a bird, and won’t soften with frying. It should look like this:

Yes, the feet are still on for a reason. First, they look cool. Second, and here’s the coolest thing about this recipe, frying softens the bones of a snipe to the point where you can eat them! You can eat almost the entire snipe when done this way. Ditto for doves. Quail are a little stockier, so you’ll still need a bone bowl. Extra calcium for everyone!

When I finally made Jesse’s recipe, I was pretty sure it’d be good. I was wrong. It’s fantastic. Like, punch yo momma in the face good! Like, get away, they’re all mine good! You need these in your life.

I know, snipe are hard to come by. But doves work great, and quail, especially store-bought quail, which are smaller than wild ones, work well too.

Make this as an appetizer. You won’t be sad. 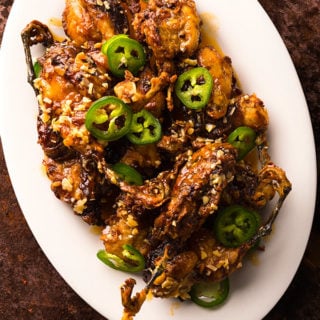 You can use quail, wild or store-bought, or doves for this recipe if you don't have snipe. Don't skimp on the sauce, as it's awesome: sweet, buttery, spicy, garlicky. These are best served within minutes of being doused in the sauce, so don't let them wait around.
Prep Time4 hrs
Cook Time10 mins
Total Time4 hrs 10 mins
Course: Appetizer
Cuisine: American
Servings: 4 people
Author: Hank Shaw