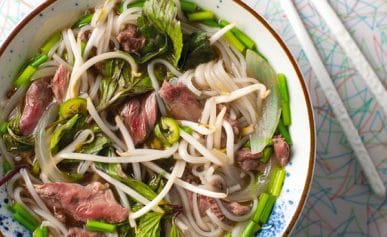 When I told Holly I wanted to make a wild duck pho, she smirked: “I think you should call it ‘phuk.'” Perfect! So here ya go: My wild game version of that Vietnamese classic soup. And lemme tell ya, it is phuk-ing good!

I got the inspiration to make this dish after reading Heather’s post on her leftover turkey pho, which is pronounced “fuh,” just do you know.  Pho is typically made with beef broth, and duck’s meaty, dark meat is an excellent substitute.

America’s favorite pho is pho tai, which is the soup served with thinly sliced strips of beef, which are tossed into the soup raw and are cooked by its heat. Again, duck breast is the perfect stand-in.

What’s more, pho is one or our favorite meals after a morning of duck hunting. It is warm, flavorful and very, very filling — if you order the gi-normous bowl, as I always do. The key is in the broth, which is sweet-smelling from ginger, star anise and other spices. You can’t make good pho without good broth.

So I spent three hours making a lovely pho broth with my various bits. Two key things about pho broth: First, you do not roast the bones. Pho broth should be light. Second, it need body, which is why it is traditionally made with knuckle bones. My solution was to add duck feet, which have collagen in them to add body. Be sure to hack at them a few times with a cleaver or heavy knife to open them up to the broth.

For you duck hunters out there, this is a perfect use for all the carcasses and giblets and feet you will collect. It should make you feel better about breasting out birds, too, because you can breast out a bird, skin it and then keep the remainder for this recipe.

For non-hunters, you can easily do this with domestic duck or goose — but be sure to remove as much fat as you can, because pho broth is not supposed to be greasy; a little fat is good, but not great globs of it.

Making pho is pretty time-consuming on the front end, but once you make the broth this comes together quickly. Don’t try to skip the broth-making here — the broth makes or breaks a good pho, and besides, this is a perfect use for leftover duck carcasses. Once made, the broth can be frozen for months or refrigerated for a few days. When you serve, have everything set out beforehand and bring it all together quickly.
Prep Time30 mins
Cook Time3 hrs
Total Time3 hrs 30 mins
Course: Soup
Cuisine: Vietnamese
Servings: 8 people
Author: Hank Shaw 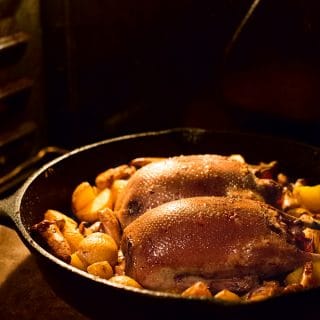 You can find more than 100 recipes for ducks and geese here on Hunter Angler Gardener Cook!