I fell in love with chilaca chiles the moment I learned about them, which, I am not ashamed to say, is fairly recently.

Chilaca chiles are long, slender, medium-hot chiles from Mexico. Think poblanos, only stretched out and a bit spicier. Pronounced chee-LAH-kah, they are popular in Michoacan, which is where many of the Mexican immigrants here in the Sacramento area came from.

I first heard about them in Diana Kennedy’s book From My Mexican Kitchen: Techniques and Ingredients, which I bought some years ago.

I later saw an entry for them in a book I am currently obsessed with, Marciel Presilla’s Peppers of the Americas, which has entries on all sorts of chiles from the US down to far South America.

As a side note, Maricel notes that there is an amazing woman in Indiana who raises maybe 1000 kinds of chiles and sells seedlings. She’s known as the Chile Woman, and I highly recommend here. Tell her I sent you…

Then, one day, in a local Mexican market, I saw the prettiest chilacas, some a full foot long. I had to buy them. See the serrano in the corner? Yeah, that’s how big these chiles are.

I sliced some crosswise for a sort of Mexican stir fry, and they were kinda cool: inky forest green on the outside, light green on the inside. I then made a green salsa with some that were just cut up. It was, well, just OK.

Where chilaca chiles really shine is as rajas, which means strips in Spanish. Most of you who know what rajas are know them as a poblano thing, and that they are. But chilacas are better. They shred nicer, and in longer strips.

I blister all my chiles directly on my gas burners, which is a far superior way to do this than using the broiler, which will overcook any chile, but especially a thin-walled chilaca. You could blister them directly over a hot wood fire, too, which would be even better.

If you don’t know how to fire-roast chiles, here is a tutorial.

How did I use my chilaca rajas? In this wonderful, comforting Mexican stew I found in another of Kennedy’s books, her My Mexico.

It is a fascinating technique, basically a reverse seared stew: You simmer the pork first, remove some broth, let the pot simmer dry until the pork’s fat renders, then fry the tender pork chunks in its own fat.

A quick, tomato-based sauce coats the pork, the chilaca rajas go in, and you’re ready to rock. This can be eaten as a stew, over rice, or in tacos or a burrito.

You’ll find chilacas in the produce section of Mexican markets. You can also find them dried, where they are an entirely different thing: chile pasilla. If you want to grow some, The Chile Woman has seedlings, or you will find them as pasilla chiles in most catalogs, after what a chilaca becomes once it’s ripe. 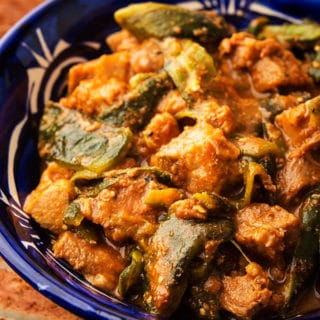 Obviously I use chilaca chiles here, but don't get hung up on it. You can use the easier-to-find poblanos instead, which are in most supermarkets. Everything else is easy to find.
Prep Time45 mins
Cook Time1 hr 30 mins
Total Time2 hrs 15 mins
Course: Main Course
Cuisine: Mexican
Servings: 6 people
Author: Hank Shaw 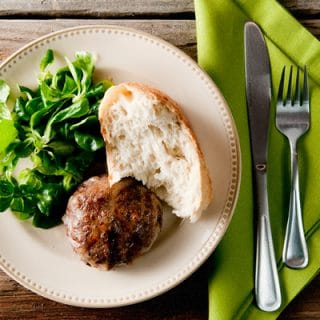 You can find all sorts of recipes for pork, wild or store-bought, here on Hunter Angler Gardener Cook!