Candied angelica, if you’ve ever heard of it at all, evokes thoughts of Ye Olde England or Louis the Sun King’s France.

Garden angelica, Angelica archangelica, is native to Europe and is plant most often candied. But many North American wild angelicas can also be used, although, it should be noted, not many that live in California, which can be quite bitter. Angelica’s cousin lovage, Levisticum officianale, is equally good candied.

But I am getting ahead of myself.

First, you need to know what candied angelica is. It is a very old form of candy. Flavor and structure comes from the herb stems, sweetness from cane sugar. The stems are blanched, then soaked in heavy syrup, boiled in that syrup, soaked again — several times — until they turn translucent. You then dry the stems a bit and roll them in caster sugar.

Do this and they will keep in a cool, dry place for, well… I had some two years and they were just beginning to show signs of age.

What on earth do you do with these lovely, hollow sticks? If your first thought was, “use them as a straw,” you’d be right. A straw for a soda, or maybe a bloody Mary. Or to stir something that has gin in it — angelica is one of the most important herbs that make up gin. And yes, gin is more than just juniper.

I like to slice the stems into little hollow coins and use them to decorate ice cream or some other dessert.

What is this flavor? Well, angelica and lovage are different, but equally excellent. Angelica has a bit of an anise thing going on, but it’s no fennel (whose stems you can also candy, incidentally). Angelica is more floral, a little bitter, and a bit carroty. Lovage is like parsley, celery and something sweet all wrapped together. Angelica, lovage, parsley, celery and fennel are all related to carrots in the family Apiaceae.

So is, you should know, hemlock. Both common and water hemlock are in this family, as is giant hogweed, the juice of which can give you serious burns if it gets on you in the sunlight. This, combined with the fact that many of the 60+ species of angelica, not to mention the various levisticum plants, range from the delicious A. sylvestris to the appalling A. breweri, leads me to suggest that if you want to make your own candied angelica, stick with the kind you can grow in your garden.

Seeds of garden angelica, A. archangelica, can sometimes be found in garden stores, but I buy my angelica seeds online.

Lovage is a bit easier to find in garden stores, and I’ve even found it in the Sacramento Farmer’s Market under the highway on Sundays. If you’re looking for A. sylvestris to play with, you’ll need to be in eastern Canada, Minnesota, Wisconsin or Maine. My friend Alan Bergo has written a bit about using this species in the kitchen.

Let’s get to it. Here’s how you make candied angelica.

You’ll need stems. As many as you think you’ll use in a year or so. Stout stems are best, as you’ll be peeling them. Mostly this will be on second-year plants (most members of this family are biennial), but I’ve harvested first-year stems, too. A pound is a good starting point.

Cut them to even lengths. Any length is fine, but you will be storing these in jars, so keep that in mind.

Boil in water, peel the outer layer off, then dunk in syrup. Leave this overnight. Next day, boil the syrup, then the stems in the syrup for a minute or so, then let it rest again. Do this at least three times total, and four isn’t too much. The point is you want to thoroughly saturate the stems with syrup.

When you’re ready, take them out of the boiling syrup and let them cool and dry a bit on racks.

After this, you roll the stems in granulated or caster sugar and you’re done. Store your candied angelica in a Mason jar, ideally with one of those moisture-sucking silica pouches. I keep mine tucked in the back of the fridge, but you can store these in a cool room like a basement. And yes, you can put them on the shelf in the pantry, but they won’t last as long. 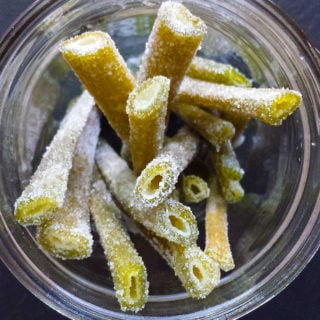 Keep in mind you can use stems from angelica, lovage, fennel or any other edible member of the Apiaceae family. Be careful abut your identification if you are foraging, however, as poison hemlock is in this family!
Prep Time20 mins
Cook Time5 mins
Total Time25 mins
Course: Dessert
Cuisine: British
Servings: 4 people
Author: Hank Shaw

Don't toss the syrup! It's amazing with a bit of seltzer water, plus gin or vodka if you want an easy cocktail.